Have you heard? We have a new podcast! Listen on Apple Podcasts 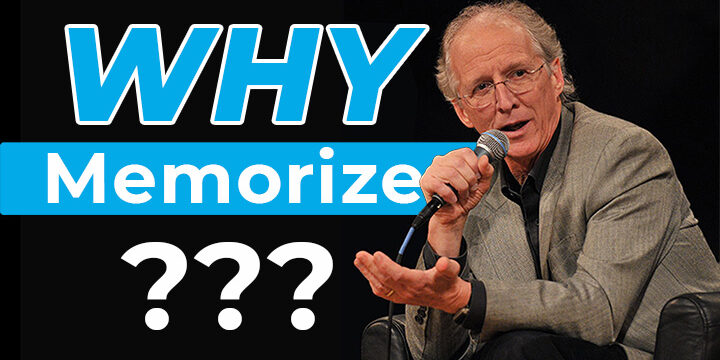 There is no verse in the Bible that explicitly commands us to memorize Scripture, so why does Pastor John Piper do it? Here are six though-provoking ideas based on his sermons.

“How anybody walks through this devil-ruled world without a sword in their hand is beyond me.”

John Piper, founder of Desiring God Ministries and one of the most respected Biblical theologians of this century, puts a high priority on Scripture memory.

So high, in fact, that he has on multiple occasions simply recited entire books of the Bible instead of giving a sermon from the pulpit. Although he isn’t the only preacher who has done this (see David Platt, Francis Chan and others), he is one of the few who strongly advocates for Scripture memory among Christians.

Piper admits that the Bible doesn’t command us to memorize Scripture (at least not explicitly), but that’s not the point.

Based on a few of his sermons over the past three decades, here are the seven primary reasons and benefits John Piper gives for Bible memory.

1. Memorization Leads to a Deeper Understanding of God’s Word

Memorization allows us to meditate in places where we don’t have access to the Bible.

I’ve experienced this first hand, while sitting in a Chinese jail cell against false charges. At that time, I only had about 20 verses I could meditate on and that’s not nearly enough to build that deeper understanding that Pastor Piper refers to.

“Faith comes by hearing and hearing by the word of God”

As we memorize Scripture, and particularly as we review the Bible verses we memorize, we “speak” the word of God to ourselves. And that hearing builds our faith in ways that even listening to a sermon cannot do.

Because it’s God’s Word within us.

Meditating and hearing God’s Word in our minds is exactly how we can be “transformed by the renewing of our minds”, as it says in Romans 12:2.

The purpose of memorizing the Bible is not only for personal transformation, but also as a defense.

Even the Lord Jesus, as He was being tempted by Satan, used Scripture as a defense. What is the one phrase that He uses over 30 times throughout the four gospels?

“It is written,” this is the one phrase that Jesus says over and over again as He battles temptation or teaches His followers. And each time, he follows that with Scripture that He had memorized.

So yes, even Jesus practiced Scripture memorization (cause He didn’t have a smartphone or pocket-sized Bible with Him!)

4. Bible Memory is a Defense Against False Teaching

False teaching finds its way into the body of Christ where deep understanding of the Bible is lacking.

This is what Paul was dealing with when he wrote his letter to the churches in Galatia:

I am astonished that you are so quickly deserting the one who called you to live in the grace of Christ and are turning to a different gospel— which is really no gospel at all. Evidently some people are throwing you into confusion and are trying to pervert the gospel of Christ.

And although Bible memory isn’t the only way to achieve that understanding, it’s a great foundation to start with and certainly a lot cheaper than getting a seminary degree!

5. Bible Memory is Ammunition to Fight the Devil

What are you hitting him with? He is millions of times stronger than you!

A Christian opposing the devil unprepared is no different than a soldier going to war without his gun and gear. It’s ridiculous.

You will not be ready to fight that enemy without the Word of God impressed on your mind.

6. Bible Memory Gives us Words to Say in Relationships with Others

How does Scripture memory guide us in our relationship with those around us?

How beautiful would it be for you if, when a friend approaches you hurting or in need of prayer, instead of asking God to give you some encouraging word to say out of thin air, you ask God to point out which passage of Scripture that you’ve memorized that would be most edifying to them?

Pray a psalm over your friend.

Bless them with the benediction of Jude.

Recite God’s promises to them.

7. Bible Memory Gives us a Matrix for Fellowship with Jesus

“He talks to me through His word, and I speak back to Him in prayer. And if this (the Bible) is here (in the mind), we can talk anywhere”

It is through the Bible that we can reliably hear God speak. And if we have memorized His Word, we can talk to Him from anywhere.

So what about you, are you willing to make Bible memory a priority?

If you need more reason on why you should memorize extended portions of the Bible, here are my own WHYs in Bible memory.

And for those who wants to learn more about Pastor John Piper, here are his advice for better bible memory as well as his 1 Peter recited from memory.