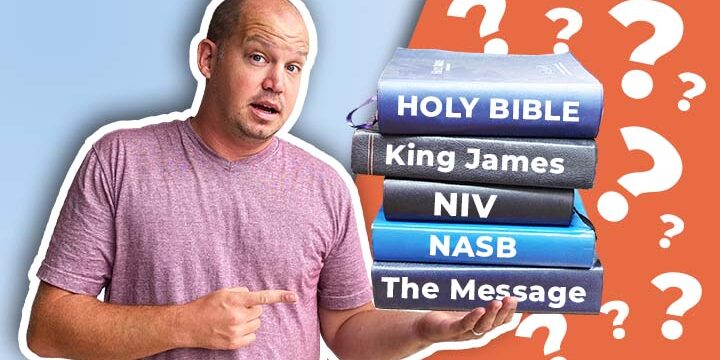 Unless you’re one of the very few who are memorizing the original Greek or Hebrew text of the Bible, at some point you’re going to have to answer this one question that seems simple, and yet is deceptively difficult: which is the best Bible translation to memorize?

In English? It’s estimated that we have more than 450 translations.

Considering how many hundreds of hours we’ll end up spending memorizing the Bible over our lifetime, it makes sense to take this choosing of a version seriously.

Translations are more than a simple three- or four-letter acronym like KJV, NIV, NASB, etc. They represent a specific methodology of interpretation that you may not realize at first.

Languages are a tricky thing. If you’ve ever studied another language before, you’ll understand that every translation involves at least a little bit of interpretation.

What do I mean by that?

Well take, for example, this phrase in Chinese.

A literal, word-for-word translation of that phrase into English would be “I studied and then, off to eat some thing.“

Of course, a better, thought-for-thought translation would be “After I’m done studying, I’m going to eat something“. That’s very much an everyday thought that I would naturally say in English.

And then we could turn it into a creative paraphrase, where I translate that to: “After I’m done filling my mind with knowledge, I will then focus on filling my belly with food“.

We have three very different translations here, which include:

This chart above can give you a pretty visual understanding of how translations can be categorized. This can be applied to any language, but what I’m showing you here are the most popular versions of the English language.

Some people love the more literal, somewhat poetic nature of the King James version; others, like me, lean more toward the thought for thought translations like the NIV or the NLT. And I don’t know many people who memorize The Message, because it takes a very bold leap into the realm of paraphrasing, but it is an option.

How to Choose a Bible Translation to Memorize

So how do you choose which Bible translation to use?

If you can put aside any notion that one translation is more holy than another translation – and I recognize that might be hard for some people – here’s how I recommend you choose the translation you’ll use to memorize.

I would start with three very intentional questions.

Which Translation Are You Most Familiar With?

Although I grew up using the King James version as a kid, I enjoyed a number of different translations throughout college and my early adult life.

I was exploring the best Bible translation options and trying to figure out what worked for me.

Although I still love using different translations as I study the Bible, for the purpose of memory, I wanted to stick with the translation that felt most familiar to me. In my case, that was the NIV.

Do You Prefer Formal or Functional Text?

It’s the age-old question of form vs function. But it’s important to consider!

Take, for example, what the book of James says in chapter 5. In the King James Version, it reads:

“Ye…have seen the end of the Lord, that the Lord is very pitiful…”

Compare that to the translation of this same verse into the New International Version, where the same text is translated as:

“You…have seen what the Lord finally brought about. The Lord is full of compassion and mercy…”

Both are correct translations, but one is formal (KJV) while the other uses a more modern English (NIV).

Personally, I prefer to memorize the kind of text that would be understandable to the average person. I don’t want to have to recite the Bible and then translate it. I would much rather memorize a translation that conveys the appropriate meaning in modern day English. But that’s just me.

Many of the Bible memory experts I’ve interviewed use the King James or New King James version.

What is the Translation of Your Study Bible?

Finally, I think it’s also important to consider the translation of your daily study Bible.

Comparing different translations while you study the Bible is definitely a good thing, especially since most of us can’t read the original text.

But when it comes to memorizing, we have to choose one.

Which Bible translation you use isn’t about figuring out which interpretation is more acceptable to God, it’s about finding something that you can understand, that will be easier for you to remember, and that you will continue to use as you read and study God’s Word.

Once you start memorizing, there will be people who tell you that you’ve chosen a “lesser” version to memorize. They may not have wrong intentions, but they will be discouraging.

…God will honor the time you spend memorizing and meditating on His Word, regardless of whether or not it’s the “best Bible translation”.