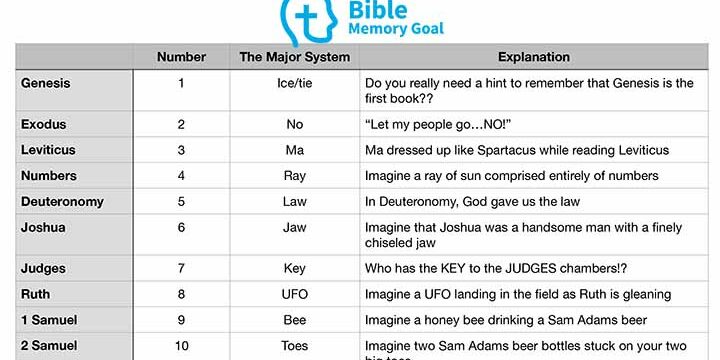 It’s interesting to think about how our brains are bad at remembering numbers yet good at memorizing images. Perhaps this is why The Major System is so popular! It’s a system that allows us to convert dull numbers into striking word images! In this video, Josh together with James Maples and Carlin Day, will walk us through the major system and how it is used in Bible memory.

The Major System is based on the principle that visuals are easier to remember than numbers. So, it works by converting numbers into sounds, then the sounds into words, and finally, the words into images.

The basics of this system and how it relates to Bible memory have been detailed here, but you can also download a free PDF that explains all of this and gives you the tools to create your own Major System number grid. Grab your copy here:

The Major System | Rules to Start

In order to understand The Major System, you need to begin with a set of initial rules. These include:

Now that you have the initial rules of the system, let’s take a look at how The Major System works.

Turning numbers into words requires us to make every number equal a particular sound. So, what we will do is take these numbers (0-9) and assign them a sound.

Basically, the whole point of the system is we assign sounds to numbers, create solid words based on the sounds created, and then put meaning behind these words to generate images.

Here are a couple examples of how that would work:

How to Use The Major System for Bible Memory

There are a few different ways that you can use The Major System within your Bible memory framework. We’ve created a free Major System Memory Guide to explain some of this, but here are some examples for you to use.

Memorize 66 Books of the Bible, Forward and Backward

It is possible to assign each book of the Bible a number and then using The Major System, associate each book with the number.

In our Major System Memory Guide, we’ve listed out every book of the Bible, the corresponding number and an example you can use to help you remember. Give it a try and see how fast you can memorize all 66 books of the Bible!

This use of The Major System is quite common in the Bible memory community, particularly those who use a memory palace for Scripture memory.

Let’s look at a couple examples:

“I remember, Lord, your ancient laws, and I find comfort in them.”

In the above verse, if I wanted to remember that it’s the 52nd verse in Psalm 119, I associate the number 52 to the word “LioN”. Then, whenever I memorize this verse, I find a way to incorporate a lion into the memory (i.e. a lion eating the laws, or finding comfort by hugging a big, fluffy lion).

“For it has been granted to you on behalf of Christ not only to believe in him, but also to suffer for him.”

I associate the verse 29 to the word “NaP”. So whenever I come across this verse in my memory palace, I think of 4 people who are taking a nap and one of them is my friend Grant. This helps me get started with “For (4) it has been GRANTed (my friend)…”. Since they’re all napping, I know it’s verse 29.

This use of The Major System for Bible memory involves memorizing numbers within verses, such as the number of years or how old someone is. Instead of arbitrarily memorizing these numbers, you can use the Major System to memorize these.

“What I mean is this: The law, introduced 430 years later, does not set aside the covenant previously established by

Within this example verse, it talks about the law being introduced 430 years later.

So, I just think of the two tablets of Moses suddenly growing arms.

This may not be important to everybody, but it’s another interesting use of The Major System for a Christian. Keep in mind that in most cases, when people memorize dates using The Major System, they don’t include the “1” at the beginning, since it makes it harder to create an image and it’s assumed that you’ll know that the event happened in a particular century at least.

Here are a couple examples that I came up with as examples:

In the end, it all boils down to how vivid you can create these images. So, make sure to put feelings into each of these images and personalize it according to your liking!

For other memory techniques, check out the Memory Palace Technique and its advanced version.